from the archives
This post is dedicated to my little Maximilian Rafael in heaven. 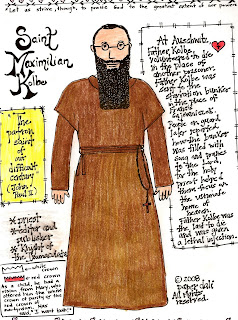 Download a black and white PDF of Saint Maximilian Kolbe.

Special note: If you have small children, you may want to read a more child-friendly version of Saint Maximilian's life. The version in this post is grittier and deals with themes that might be too much for the younger set.


St. Maximilian Kolbe
priest, editor, publisher, martyr
A prisoner was missing. Despite the high walls, the electrified fences and sentry towers, someone had attempted to escape Auschwitz, the most infamous death camp of Nazi-controlled Poland. The other prisoners of Bunker 14A stood at attention, motionless with fright, from dawn until noon as the prison guards and their vicious bloodhounds searched ruthlessly for the prisoner who had not answered at the dawn roll call.

Hours passed. No food, no water was given. With fear in their hearts, the 600 Bunker 14A prisoners waited. And waited. The Nazis would punish 10 of them in place for the one who had escaped. All had seen it happen before, to other bunkers. And while the day continued in agonizing slowness, the prisoners' fear was palpable. Men fell from exhaustion, fright, weakness. The guards kicked and dragged them away.

Finally, Commander Fritsch screamed at them. The prisoner had not been found. He randomly began choosing men to be tossed into Block 13 without food or water until they died. After he ordered the fourth prisoner to step forward, a sob broke through the silence. "Please, not me!" cried Francis Gajowniczek.

From the testimony of Francis Gajowniczek: "I knew Fr. Kolbe personally only during the summer of 1941, the day that he offered his life for me ... The Lagerfuhrer, Fritsch, commandant of the camp, surrounded by guards, approached and from the rows began to choose ten prisoners to send to death. The Fuhrer also pointed with his finger at me. I stepped out of the row and cried that I desired to see my children again. After an instant, a prisoner stepped out of the line, offering himself in my place ..."

From the testimony of another eyewitness, Dr. Nicetas Francis Wlodarski: "After the choice of the ten prisoners, Fr. Maximilian stepped out of line and, taking off his cap, he stood at attention before the Commandant. Surprised, and directing himself to Fr. Maximilian, he said, 'What does this Polish pig want?' Pointing his finger toward Francis Gajowniczek, already chosen for death, Fr. Maximilian replied, 'I am a Polish Catholic priest. I am old. I want to take his place because he has a wife and children.' It seemed incredible that Commandant Fritsch had taken Gajowniczek from the group of the condemned and had accepted the offer of Fr. Kolbe, instead of condemning both of them to the starvation bunker. With such a monster, that would have been possible."

The starvation bunk became a place for prayer and singing. Despite their inevitable death, the prisoners were consoled by Papa Kolbe, who urged them to sing hymns to God. An eyewitness to this said the bunker became like a church, for it resonated with songs and praise.

After two weeks, the Nazis could wait no longer for death. Papa Kolbe was killed with an injection of carbolic acid.

Witness to Love
The example of Father Kolbe's life and his sacrifice has touched millions of people. Any online search will bring a wealth of information. Because this is a blog, however, I will share my own story.

Papa Kolbe was canonized the year that I received the sacrament of Confirmation. The bishop, Cardinal John O'Connor, spoke about the life of a Polish priest, Maximilian Kolbe. In his homily, the cardinal wove the beautiful story of the troublesome little boy who was forever irritating his mother who grew up to be a wordsmithing holy friar. He loved words and wrote and published periodicals and newspapers to strengthen people in their faith. His life was filled with tiny sacrifices of love, moments of grace, and suffering through which joy prevailed. Even in the death camp, Papa Kolbe smuggled the crumbs from his meal to celebrate Mass in a bunker. Despite death all around him, he spoke of life and love and forgiveness to his fellow prisoners. No one heard him ever complain.

At 12, I listened to the story, transfixed. Papa Kolbe was unlike any other saints to me at the time. There were photographs of him. People who knew him were still alive. And, like me, he loved words and writing! I named myself after him then --- the Maria from his own middle name. His example of uncomplaining service and untiring love encouraged me, as a preteen, to try and be a good student, an obedient child and faithful servant of God.

Though I eventually strayed from the path for a few years, I later found my way back home. And St. Maximilian Kolbe regained his position as my hero.

Now, as an editor, I often ask for him to pray for me, so that I may do a good job, that I will do my work with love, that I will not complain.

Whenever I read about his life, I become encourage to live out my vocation with sweetness and joy. Who am I to complain about laundry? How can I grow irritated by messes? How can I get lose my temper over a dropped quart of milk? I need to hold everything up to the light of eternity and keep life and its suffering and sorrows in perspective.

For those who would like to learn more, check out the Maximilian Kolbe entry at Wikipedia. Catholic Cuisine also features a pretty Kolbe rosary and a delicious Polish dinner and dessert.

Vee, what a beautiful experience!! You made me cry! Thank you for sharing such encouraging thoughts!

I have a picture of St. Maximilian on my desk. He is one of my best friends in heaven. The other, of course, is Miguel. :)

what inspiration. thank you! 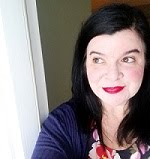